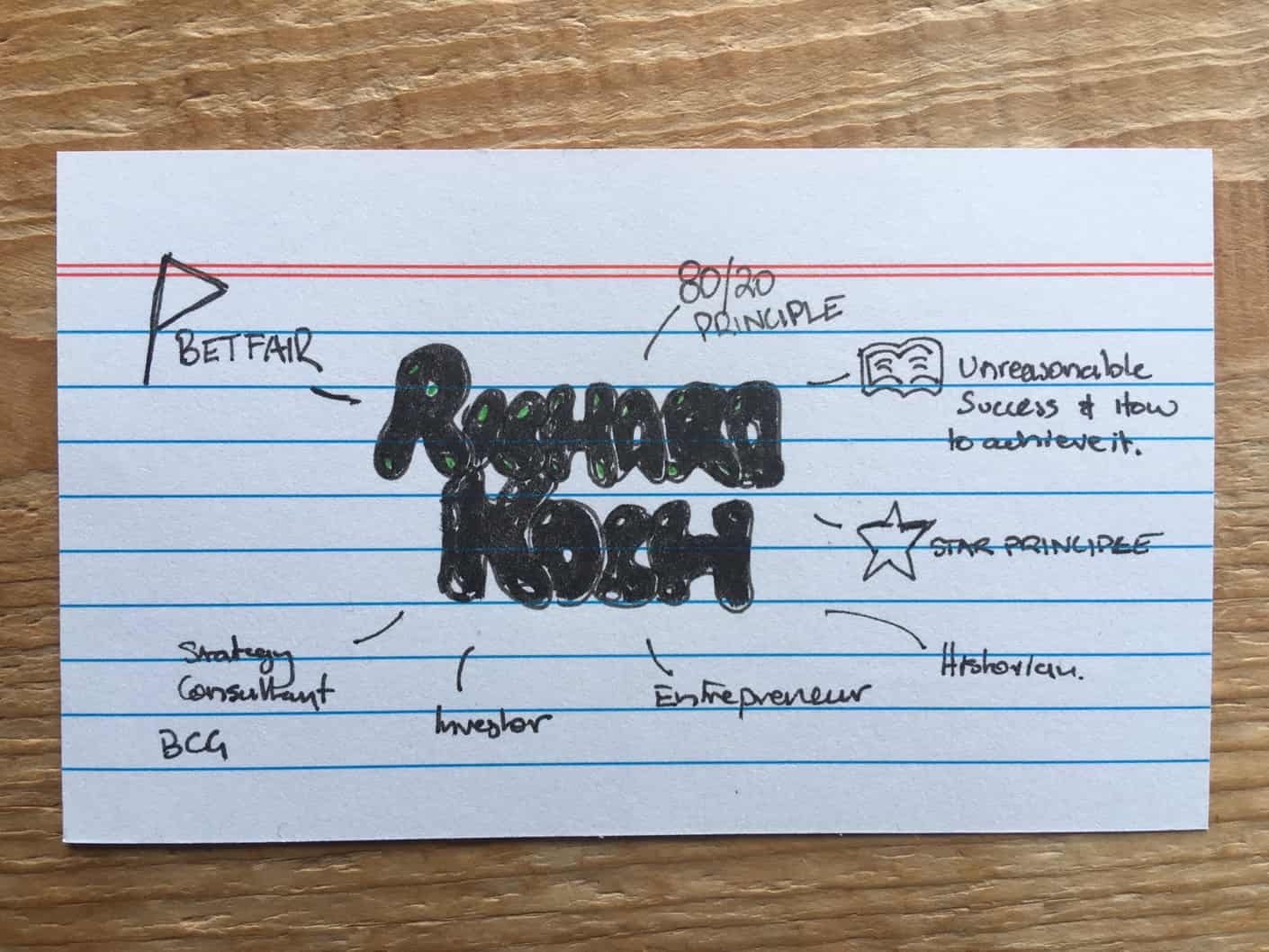 Richard Koch (pronounced Kosh) is a British investor, entrepreneur, former strategy consultant and historian. But he is most well-known for his work on the 80/20 Principle (discussed below).

I’ve gone direct to the source to tease out some bits of information that stuck out to me. Tim’s interview went for nearly 3 hours. If you give it a listen, you’ll soon realise that Richard loves to tell a story. He has a voice that induces you into listen, however, it can be a little long-winded in places.

The first link I will make is to Richard’s last name Koch and the word cash as they are in the same studio of sounds. This prompted me to think about Richard’s investment approach which he refers to as identifying Star Companies.

I’m sure this is covered at length in his book, Star Principle, but my understanding of this principle is linked to Ferriss’ borrowed idea of the Law of Category from the 22 Immutable Laws of Marketing.

What this boils down to is identifying whether or not a company is young and in a phase of high growth. The important metric for Richard to consider is does that company own the category?

In other words, are they sailing in a blue ocean of uncontested market space. Hello Blue Ocean Strategy!

He referred to the example of Betfair as a Star Company whom he has made a tidy return from over the years. Fascinatingly, Richard mentioned that he essentially went all-in with his liquid chips on Betfair, which is at odds with the risk management advice you hear often.

But Richard believes in his system as he as created it and it works for him. It’s intuitive.

How To Incentivise And Motivate Your Staff

Richard spoke about his time at Boston Consulting Group (BCG). I’ll be honest and reveal that I didn’t pick up the full thread of his conversation here, but what stood out to me was when he referred to an embedded promotion approach.

When he was hired, he was assured that he would be promoted in 18 months. It was a foregone conclusion.

He was asked to ‘act’ as though he had already been promoted, though, it would not be announced until the 18 month period had elapsed.

Rather than have colleagues second-guess the promotion decision, if he already acted with authority, then people would view it as a natural progression.

Richard mentioned that acting as though he had more authority incentivised him to be more loyal and dedicated to his employer. This was ingenious for the self-professed rebeller.

He remarked and wondered why more companies don’t take this approach.

I find it interesting because it gives the employee a sense of direction and security. I guess this could be related to key performance indicators, however, you’re still guessing and never sure if you’ll get there. If you take the guesswork out of the game, and ask for high performance, then it may well be delivered.

Where To Focus Your Efforts To Yield The Greatest Returns

Richard lays claim to the term 80/20 Principle. He acknowledges that Pareto’s Law and 80/20 Rule are in circulation but it is he who coined this term.

In short, the principle asks you to identify the 20% of inputs that deliver 80% of the output.

This principle was identified in economics and wealth distribution where 80% of the nation’s wealth is held by 20% of the population.

Richard challenges us to extend this more broadly to other areas of our life.

He refers specifically to flow states. That’s when you’re completed engrossed with what you’re doing. You’re present with the task at hand with razor sharp focus.

That doesn’t have to refer to work, as it can also refer to something like happiness.

Where in your life can you identify the acts or activities that have a disproportionate influence on your happiness?

For me, that’s a simple surf probably once a week. Those 2-3 hours generate a sense of connection, fulfilment, rejuvenation and aliveness. I no longer need to do this regularly. But when I do, it’s a reset button of happiness.

How can you focus your life to focus on the few things that actually matter to you and do more of that?

You can apply this principle to your friendship networks, too. Who are the 20% of people who bring about the greatest connection and intimacy in your life? Maybe focus on cultivating more time with those people.

Conversely, you can identify the 20% who generate the most pain and frustration. Spend less time with these people.

Tim summarises this beautifully in his 4-Hour Work Week book when delivering his message on productivity.

The Little Baby Step of Action

This week, it’s quite simple, I plan to grab myself a copy of Richard’s latest book Unreasonable Success and How to Achieve it.

In fact, I already have my copy as I used my latest Audible credit to get it. Stay tuned for an ensuing sketchnote on its contents over the next month or so.

The reason I pulled the trigger on this book is that it’s new. I have been wading my way through seminal works over the past year. I notice they are years since being first published. I would like to focus on a recent work that has yet to be actioned by the masses.

So this is my experiment.