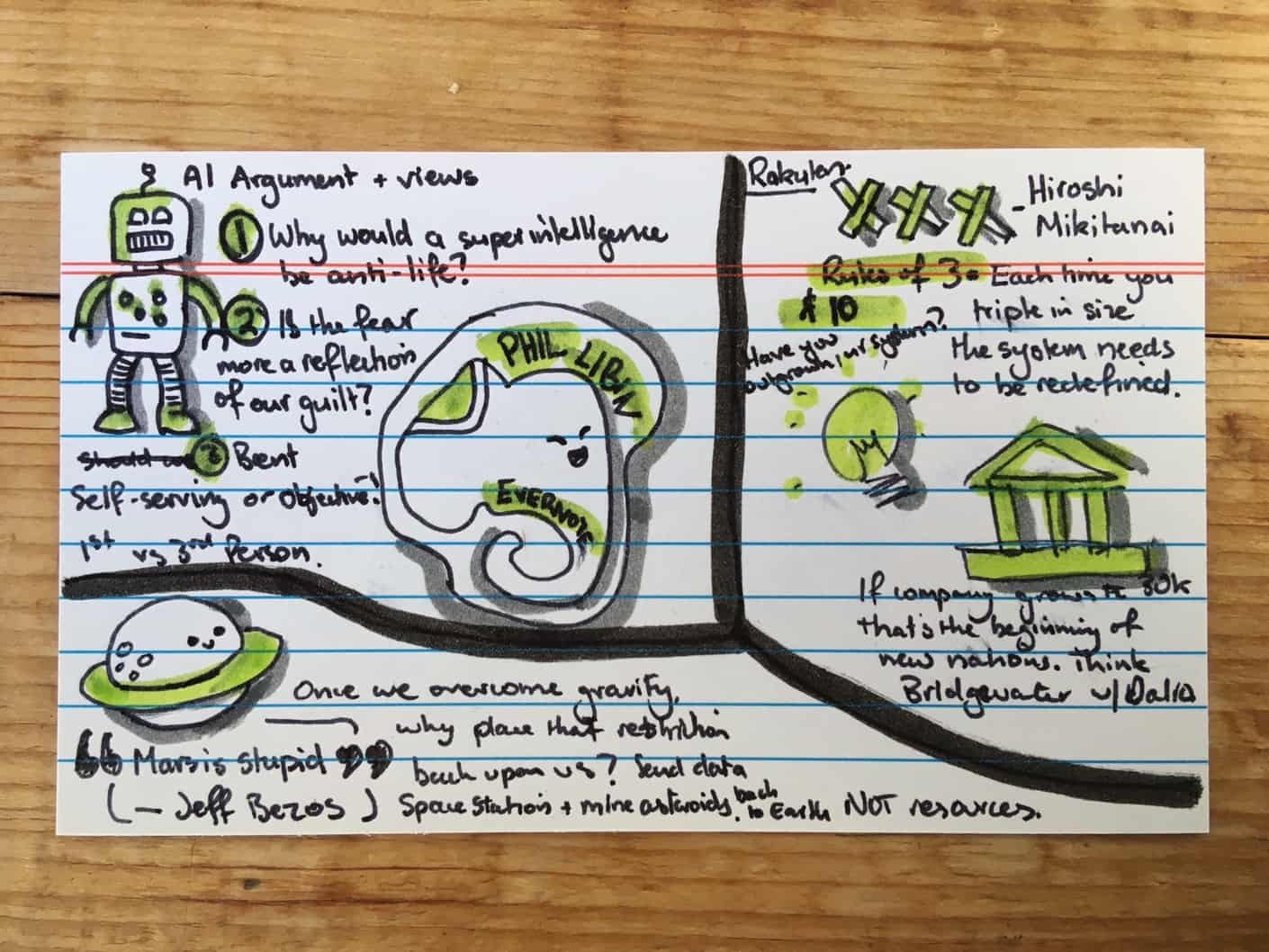 Phil Libin is the co-founder of Evernote. Interestingly, he and his crew were fed up trying to meet the needs of an audience so they looked to service their own. Phil mentions a spark with gaming but decided it was over saturated. Productivity was the gap they identified as being outdated. Evernote is born.

Phil uses Evernote for everything Evernote. It’s not a personal management device. The elephant represents the ability to recall information while the green represents the backdrop elephants can be seen in.

The Cost of Tripling in Size: Hiroshi Mikitani

This is a bit of a stretch but Phil Libin can loosely sound like elephant. You can use the “ph” phoneme to make the link stronger. Once I have Evernote I think of the first letter, E. This letter backwards looks like the number 3, which is a key point.

The rule of 3s and 10 is borrowed from Hiroshi Mikitani, founder of Japanese marketplace Rakuten. Mikitani suggests that systems and processes break when their size triples in multiples of 10. So when one turns into three, the systems need to be evaluated because the size has outgrown the process. Mikitani then rounds the grilling to the nearest 10 for easier computation. So the next level of trolling would be 10 instead of 9.

Phil mentions the opposite is true for companies with a size of 10k. It will take a long period of time to grow to 30k, but there is an obsession with a need to innovate.

Link to Ray Dalio’s Comments on Growing in Principles

As an aside, I think of Ray Dalio and Bridgewater and his comments on his company growing through these levels in his books Principles. As I was listening to Principles, I thought that what he is doing is working towards creating a system of governance. In essence, will companies be the precursors to next nation states and governments? They define the rules of their game and have huge user bases. Are these companies nations in disguise? As consumers, we vote for these companies when we purchase their offerings. Is your purchase the best way to vote?

Why Elon Musk Is Betting Wrong on Mars

As I talk I’m thinking about Amazon as a key player here and Phil mentions a conversation with Jeff about space, which is the next link.

Jeff Bezos as quoted by Phil Libin in Tools of Titans.

Jeff argues that once we defeat gravity, why would we self-impose that limit upon ourselves again? It makes much more sense to live in anti-gravity and mine asteroids.

This comment turned Phil’s perspective on Mars. Interestingly, he made some comments about not sending resources to Earth, rather, you would mind in space for the space fairing civilisations.

What would be sent back to Earth is data.

Why The AI Debate is Flawed

This is all sounding quite futuristic and that’s the link to the robot and artificial intelligence (AI).

Phil questions the fear surrounding the extinction of the human race via AI. I’m paraphrasing here, but he asks why would a super-intelligent species be anti-life?

He sees the apocalyptic perspective as reflecting our guilt as a species. We should be investing the origins of our guilt over fear of a superior dominating us. The latter is perhaps how we’ve exercised our status over life on earth. We have been largely self-serving. A super intelligent species would be more encompassing and compassionate.