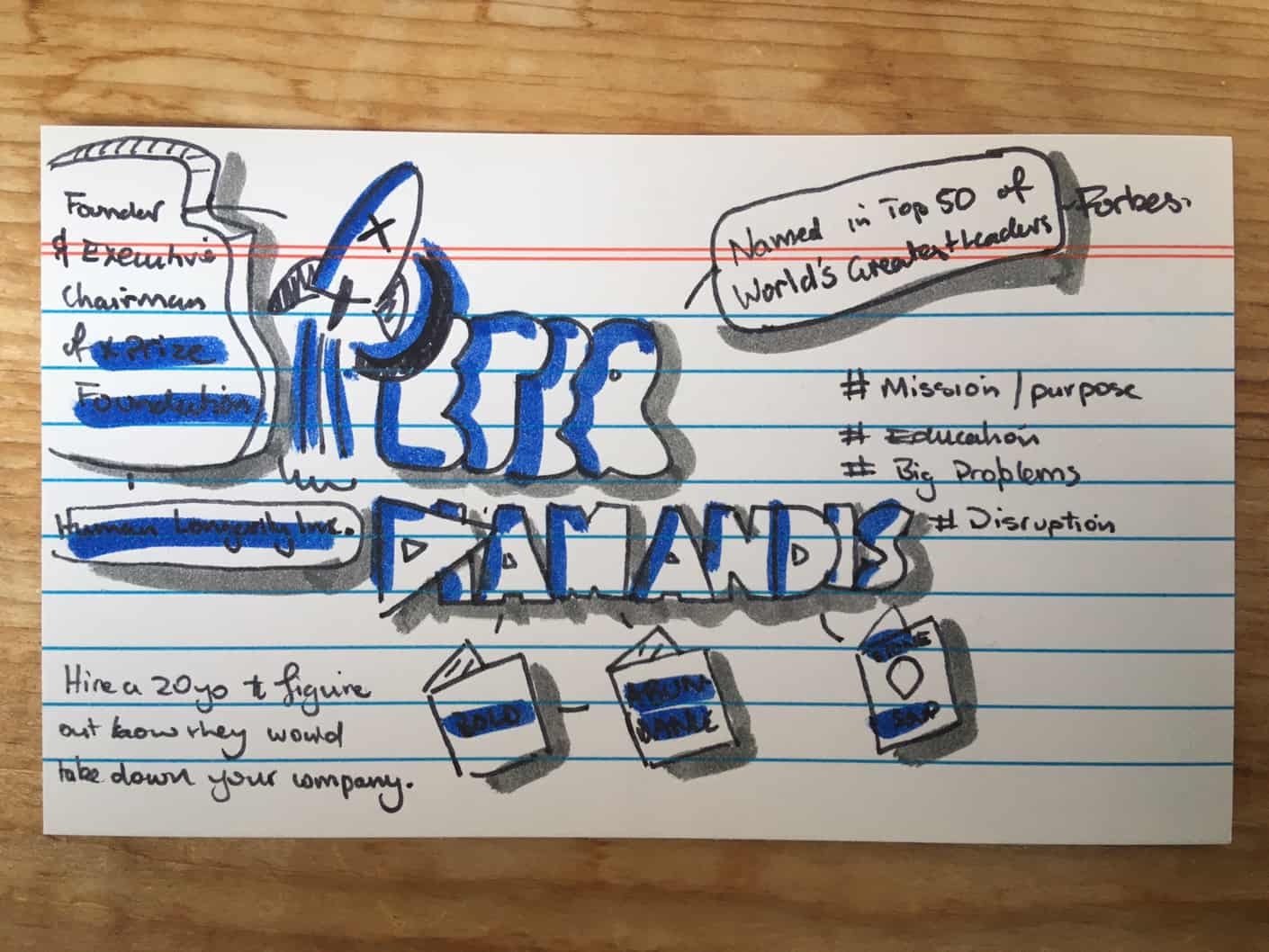 What’s the magnitude of your thinking? According to Peter, you, me and the other person are part of the 99.9% of people who aren’t focussing on the big problems.

Peter Diamandis is worth listening to. He’s rates in the top 50 of the world’s greatest leaders according to Forbes.

He is founder and executive chairman of X Prize among other notable prizes.

He is author of the books Bold and Abundance.

According to Peter, the best way to find out how your company will be disrupted is to pay a 20 year old entrepreneur to reveal how they would take down your company.

You See Problem? I See Opportunity

The world’s biggest problems are also the world’s greatest opportunities.

I find this so juicy because this depends on context.

I’ve been reading and listen to a bit on Tony Robbins and unpacking his methods to move through problems.

His solution is to ask ourselves better questions that equip us with the resources to see the opportunity.

Tracy DiNunzio in her segment mentioned that nobody listens to those who complain. Incidentally, I added to that quote “except entrepreneurs,” and that reinforces Peter’s quote.

In short, don’t fixate on your personal problems, listen to the problems of others and see it as an opportunity.

Heck, you could use that personally as well but you’re probably so caught up in your own funk that you can’t see the opportunity.

Use that tension to create and not succumb.

Peter The Poster Boy of Perseverance

Peter mentions the origin story of X Prize. The prize he planned to offer was $10 million. His fundraising hit a wall at $1 million.

But he announced the prize anyway with a cast of 20 astronauts and head figures at NASA. He refers to this as super-credibility.

He expected the funding to come but he was knocked back over 150 times. Talk about rejection. It makes Noah Kagan’s lessons on getting comfortable with rejection ever more important.

All this rejection led to sleepless 3am nights wondering if he should give up.

But he didn’t. He truly believed in his mission. He never gave up.

Failure only arrives when you give up. So never give up and you don’t fail.

Another related theme to this idea and that of Blue Ocean Strategy is going 10x bigger than your competition.

It makes your competition irrelevant and isn’t 10x harder. Consequently, the result is often a 100x return so how can you create uncontested market space by going big?

How To Connect With Your Internal Mission

Think back to what you wanted to do when you were a kid.

So it worked for Peter. I wanted to be a palaeontologist and a football player. Neither of those two things spark me in the slightest. So I have no leverage there.

His second strategy is to answer this question: if you were given $1 billion to work on a project that positively impacted the world, what would you do?

I think Phil Libin has alluded to the same question in the past. No, I’m wrong. It was Chris Young because he built Chefsteps.com

I think this is a better question to ponder but also not so fantastic for kids. Even adults have a hard time contemplating that amount of money.

Ultimately, it points to the question what matters to you. For Peter, that seems to be higher order explorative needs because he is playing at that level. He also built himself up to play at that level.

Education is for socialisation. Education should be automated by artificial intelligence so it’s tailored for the learner.

He referred to our habits and patterns of thinking as our operating system while learning areas and knowledge are akin to our apps.

Using this idea, apps could and probably should be automated. Why are we still trying to differentiate in a classroom with one teacher?

Peter suggests to get the best educators around the world and create entertaining learning experiences that are delivered at the time it’s needed for the learner.

Here I think celebrities and influencers. Imagine getting these people to teach because they are entertaining. Maybe there’s an idea in there somewhere.

My little baby step of action was to send this podcast episode to a friend.