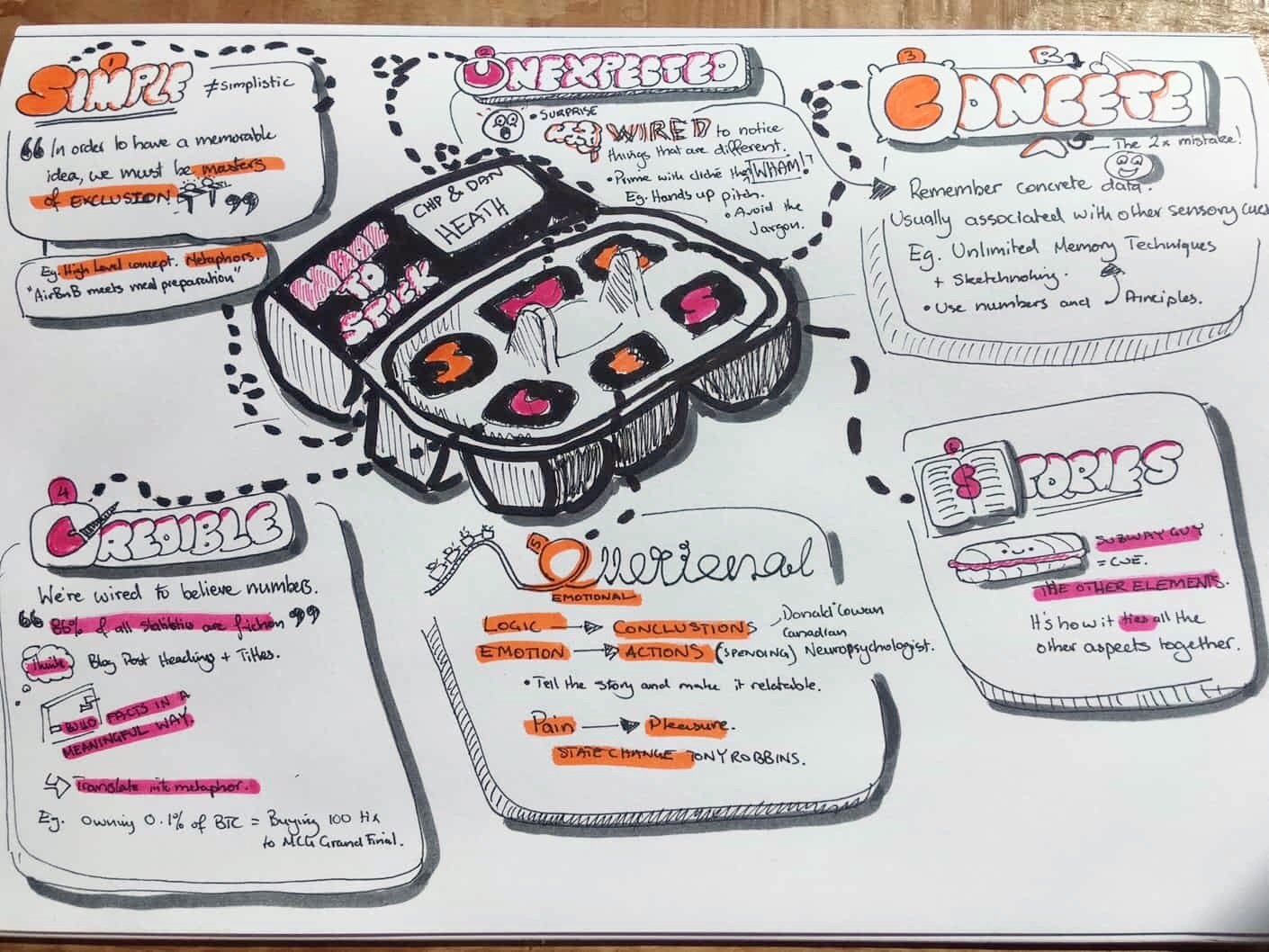 Ever told a story that had a lingering…

… ending? You just kind of let it hang out there.

Or maybe it was one of those monotone under-dramatic pieces that better suited to evening sleep routines.

Well, Chip and Dan Heath’s Made to Stick summary sets out to counter this via their SUCCES principles.

SUCCES is an acronym that stands for Simple, Unexpected, Concrete, Credible, Emotional and Stories. Remember this acronym and you’ll have success when writing or telling your next story.

You’re probably familiar with the old adage keep it simple stupid. That’s not to be confused with simplistic. I like to think of simple like distilling the content down to the most interesting parts.

Mum, if you’re ready this, I apologise in advance, but it’s the opposite of when you tell a story where you seem to think that every detail counts.

I just want the gist unless it’s a cliffhanger. Then tell me more.

In storytelling terms, you can ask yourself the question: “what really matters here?”

Remember all those outlines you painfully created before writing those essays in high-school? Those dot points in your outline are essentially the main points you wish to get across.

But we know that dot points alone aren’t a great story. We need some other elements.

If life just happened in a straight linear line, I imagine we’d quickly bore of it. The same is true for stories and what really gets us going is when something happens that we don’t expect.

That’s because our brains are wired to notice things that are out of the ordinary.

I found this to be the trickiest principle to come up with a real example, but I’m going to suggest using clichés as a starting point.

What? Clichés? How are they unexpected?

Well, here’s the thing. If you start with a cliché then debunk it, it’s kind of surprising.

Most clichés have contradictory counterparts. Take the phrase “look before you leap,” which suggests caution.

Its counterpart is “he who hesitates is lost.” Conversely, this suggests immediate action.

So you could lure your reader into either cliché and BAM! set them up for the opposite.

They didn’t see that coming.

How To Make Your Story Concrete

Read this list of words and attempt to link an image to them: apple, dog, Paris, truth.

How did you go with that last one? If you struggled, you’re not along because truth is an abstract concept and not a concrete item.

You make stories sticky when you concretise them.

In my memory investigations this year, I’ve discovered that we can use techniques to help make concepts stick.

Heck, that’s why I draw sketchnotes!

In Kevin Horsley’s Unlimited Memory, he mentions a few techniques and principles to assist with encoding information. The first principle is S.E.E. This refers to senses, exaggeration and energy.

When we use our senses, over-embellish and inject some energy into our words or visuals, then we create stronger associative links.

The same is true for stories. Ever listened to Tony Robbins? The guy speaks at break-neck speed. You can’t help but be engaged.

So next time you’re storytelling, think about how you can use your senses to guide your and your audience.

How to Craft Credible Stories

Numbers. We are wired to believe numbers.

Take this statistic: 85% of males fall asleep before their partners.

Do you believe that statistic? If you do, I scold you furiously, as I literally just made it up. But it’s kind of believable isn’t it?

So be a good story teller and use numbers that actually mean something.

However, numbers alone don’t paint the full picture. You need to make those numbers sticky. To do that, you’d best make them relatable otherwise you’ll lose your audience.

Percentages and fractions are wonderfully flexible. Let’s take that percentage we just used above: 85%. It engages you but you’re probably going to forget it.

Let’s use something that you can relate it to. Say number of days in a week.

If a day of the week represents a couple, then males will fall asleep first on every day except one.

Now that’s a little more sticky. But remember, that statistic is complete bogus, so don’t make it too sticky!

Riding The Rollercoaster Of Emotion

This one is relatively straight forward. Inject some emotion into the story.

In order to do this, you need to have a vocabulary of feelings. It’s also good to show rather than tell. What do I mean by that?

Instead of just mentioning that “he was angry”, which is plain. Describe the anger without actually using the word. You want your reader to connect the dots for you.

Another useful technique is to use empathy to connect to your readers. This is you guessing at their feelings in a particular context.

I made a guess at the start of this article that you’re wanting to learn how to tell better stories. So I had a crack at linking this to some embarrassment that you may have experienced when your story didn’t go to plan.

I could be wrong and will definitely be for some of you. But that’s empathy: guessing at what another might be feeling. It’s a powerful tool.

Did Someone Mention Story Already?

The last principle is story.

Essentially, this ties all the other principles together into a nice and neat little package called SUCCES.

As I write this article, I am preparing to pitch a business idea at an event. The pitch process is basically just a storytelling process.

I will need the presentation to be succinct and to the point to I don’t lose my audience (simple).

I will need to hook in the audience with some surprise at the beginning of the presentation (unexpected).

I will need to be energising on stage and create memorable points that are relatable (concrete).

I will need numbers to back up my claims and responds to detractors (credibility).

I will need to paint a picture of the pain that my target audience is experiencing while presenting the business idea as the elixir to it (emotion).

The pitch itself, encompassing all of the elements, becomes the story.

If you’re interested in this book and enjoyed this summary, then consider heading over to my Book Club to purchase a copy. I’ll get a cut at absolutely no extra cost to you. It’s just a way to say thanks.

Also, check out readitfor.me if you’re pressed for time and just want to get the skinny on some of the most popular books.