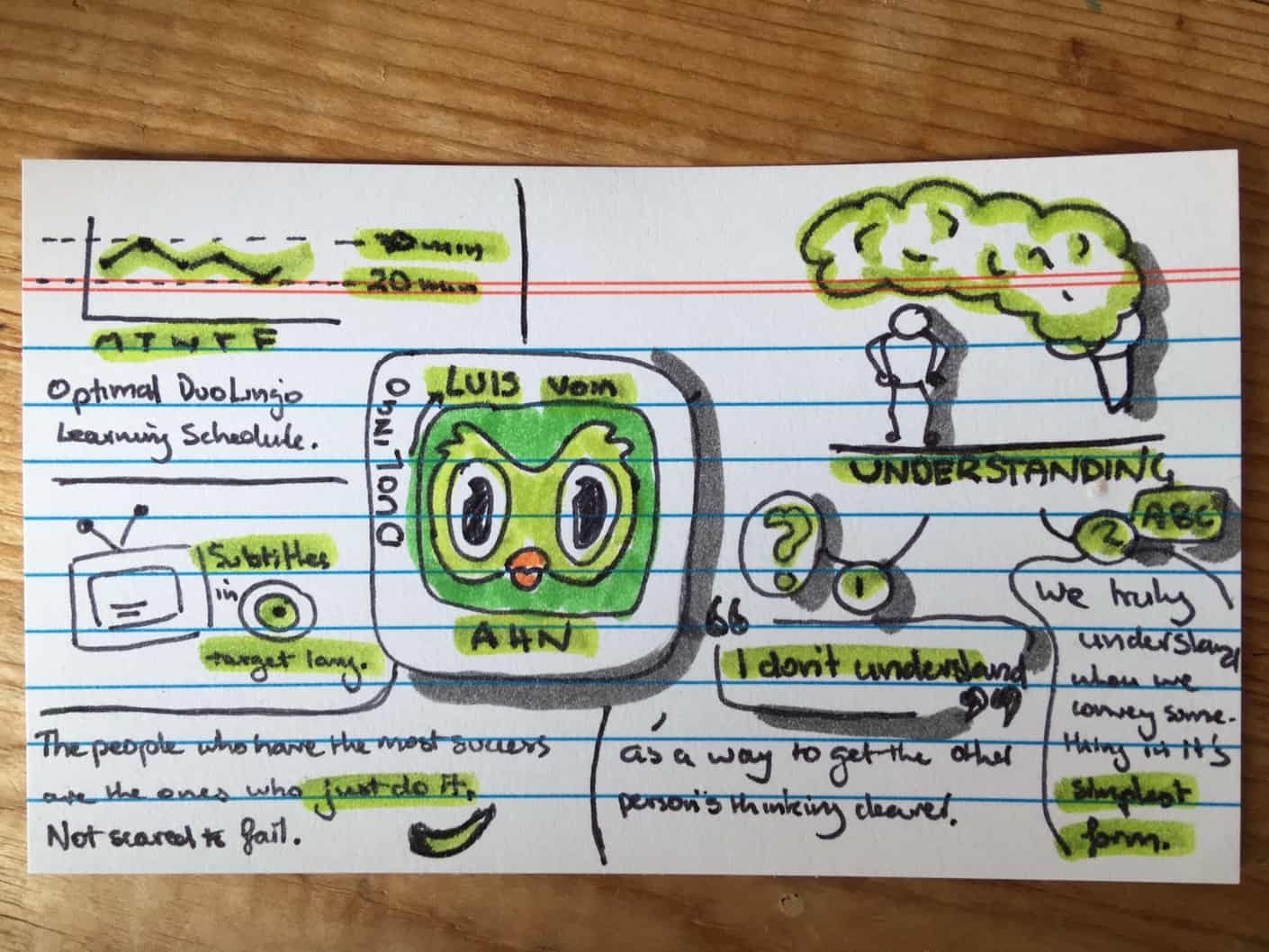 What’s the most popular language app in the world?

Luis is its co-founder and CEO at the time of the writing of Tools of Titans.

He is a computer science professor who is from Guatemala. Amusingly, in one unit he taught, he created a fake website of a solution to a problem he asked his students to solve.

What his students didn’t know was that he tracked their IP addresses thus revealing who took to Google to ‘cheat’.

He is also the founding father of those annoying captchas on the Internet. The origin story is from Yahoo where some people were using bots to create millions of email addresses. This was the solution.

Finally, A Clear Definition of Understanding

The first link is Duolingo and understanding languages.

True understanding can be measured by how simple your explanation of a topic is. If the other person requires follow-up questions, then you can continue to work on it.

He learnt this from his college professor while working on his PhD. His professor would interrupt in the first sentence and say “I don’t understand.”

This went on for months until the penny dropped: Luis hadn’t fully grasped the concepts in such a way that he could articulate them to others.

It’s an interesting idea because what is reality if we can’t communicate it to others and reach some kind of understanding on it?

I believe is was Tracey DiNunzio who referred to the Mark Twain misquote that was actually Winston Churchill on apologising for the length of the letter.

If I had more time I would have written you a shorter letter.

Hack Your Learning With These Duolingo Insights From Data

It’s a relief to hear it from the horse’s mouth when it comes to learning and data.

So just what did Luis suggest the data say about the optimal learning practices from its user base?

The most successful users showed up for between 20-30min for five days per week.

He said that one of the worst strategies is to binge learn multiple hours at once especially when you start out.

The former approach aligns with Clear’s approach in Atomic Habits. Start small and continue to just show up.

On showing up, the best thing to do when speaking a language is… to just get speaking it. In other words, overcome your fear of failing to say it correctly.

I can relate to this when learning to speak Dutch. I was so caught up in being perfect that I didn’t speak at all. Meanwhile others in my class with lower inhibitions seemed to be accelerating.

Tim suggested a neat little hack to build some momentum and overcome this: learn a few humorous phrases in the target language.

This approach breaks the ice and surprises the native speaker this neutralising fear before it had a chance to accumulate.

Tim’s last tip was to watch media in your home language with subtitles in the target language.

This is because it’s easier to rewind and catch up in your native tongue and decipher the text than the other way around.

I wonder if a possible next step would be to watch the same media but then flip the audio and subtitles.

The Small Baby Step Of Action

What’s your baby step of action?

3 thoughts on “Luis von Ahn Sketchnote From Tools of Titans”