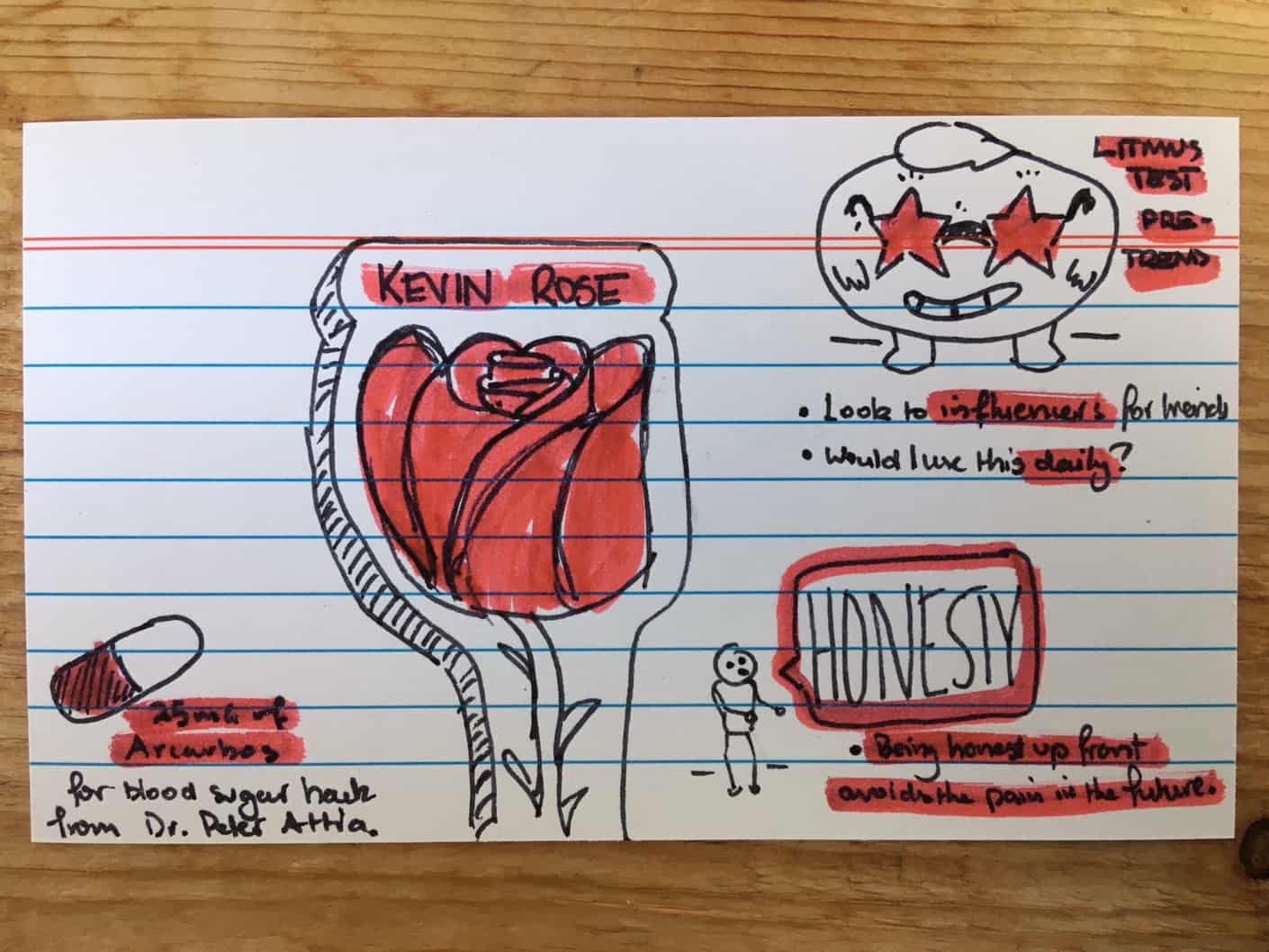 Kevin is a pal of Tim’s and was the first guest on “Tim Tim, Talk Talk.” This was the name Kevin suggested that Tim use to title his podcast.

Kevin is a proven investor and the co-founder of Digg. He’s been named in Bloomberg’s Top 25 angel investors.

He and Tim also co-host a random show podcast.

The Rose component of Kevin’s name will be used to seeds the biggest of wisdom from his interview.

The rose flower is a plant and plants grow. Kevin has a knack of identifying things before they takeoff. Twitter and Uber are just two to name a few.

He mentioned a story of observing others in school that helped him identify trends.

One time, a kid came to school in an orange onesie. This kid was someone who influenced others. Before you knew it, others in the school were also wearing this onesie.

He points to the power of influencers. Celebrities and and people in leadership positions that people respect.

His second test is asking himself: “would I use this daily?”

This point directly to the buyer utility or the usage factor of an offering, product or service.

He identified that Twitter broke the traditional mutual social contract of agreeing to befriend each other by just following.

He then saw celebrities starting to jump on it because it was convenient to do so.

Interestingly, you could use the api releases each year from Apple (ios) and Google (Android) to be early to create potential value for customers.

It won’t always work out, but it is a signal of what’s ahead and where those systems want the focus to be. Push the rock downhill.

How to Avoid Future Pain In Your Relationships

In the podcast, Kevin just touched on this but it’s something that’s been at the centre of my awareness recently. If you want a “rosey” future then it’s best to take immediate action over putting it off.

How does this translate to relationships?

When we know we should communicate something uncomfortable, we generally tend to avoid it.

It’s easier to avoid this short term discomfort. That rings true from others like James Clear and Tony Robbins who talk about delayed gratification and flipping the pain experience.

Tony suggests that we ask ourselves “what is the cost of inaction?” This question challenges us to feel the future pain in the present and offer us a choice to choose to avoid that future pain by pushing through the present pain barrier.

The cost of not showing up honestly in the beginning is usually delaying that pain. You’re essentially banking it for the future. You’re holding onto it and I know personally that results in some feelings of guilt or shame for me.

In asking Tony’s question, we flip the pain narrative so we can make inaction more painful than action. This allows us to show up honestly and authentically in the moment.

I’ve been leaning on and embodying this insight or principle over the past year and it’s incredibly liberating.

It’s not easy, but it is worth it. It saves time and future pain so it’s definitely something worth considering.

How to Hack Your Blood Sugar

In the snippet, Tim mentions Kevin’s blood sugar hack. I’m just relaying this information here, so don’t take it literally, but it does come from Dr. Peter Attia (see a tweet below).

Kevin suggests that 25mg of acarbose before your food binge prevents a spike in blood sugar.

What does this mean? Instead of the excess sugars being absorbed into your bloodstream, the sugars bind to acarbose and the result is that it passes through your stool.

I’m wondering if this hack would be good to pair on Ferriss’ cheat day in times were you want to use the Slow Card Diet to accelerate weight loss.

In the Four-Hour Body, Tim does mention that an insulin spike on these cheat days is helpful for weight loss. But it’s worth an inquiry into.

Today, I’m going to check out wayoflifeapp which is supposed to be a habit tracker.

What little baby step of action could you take?