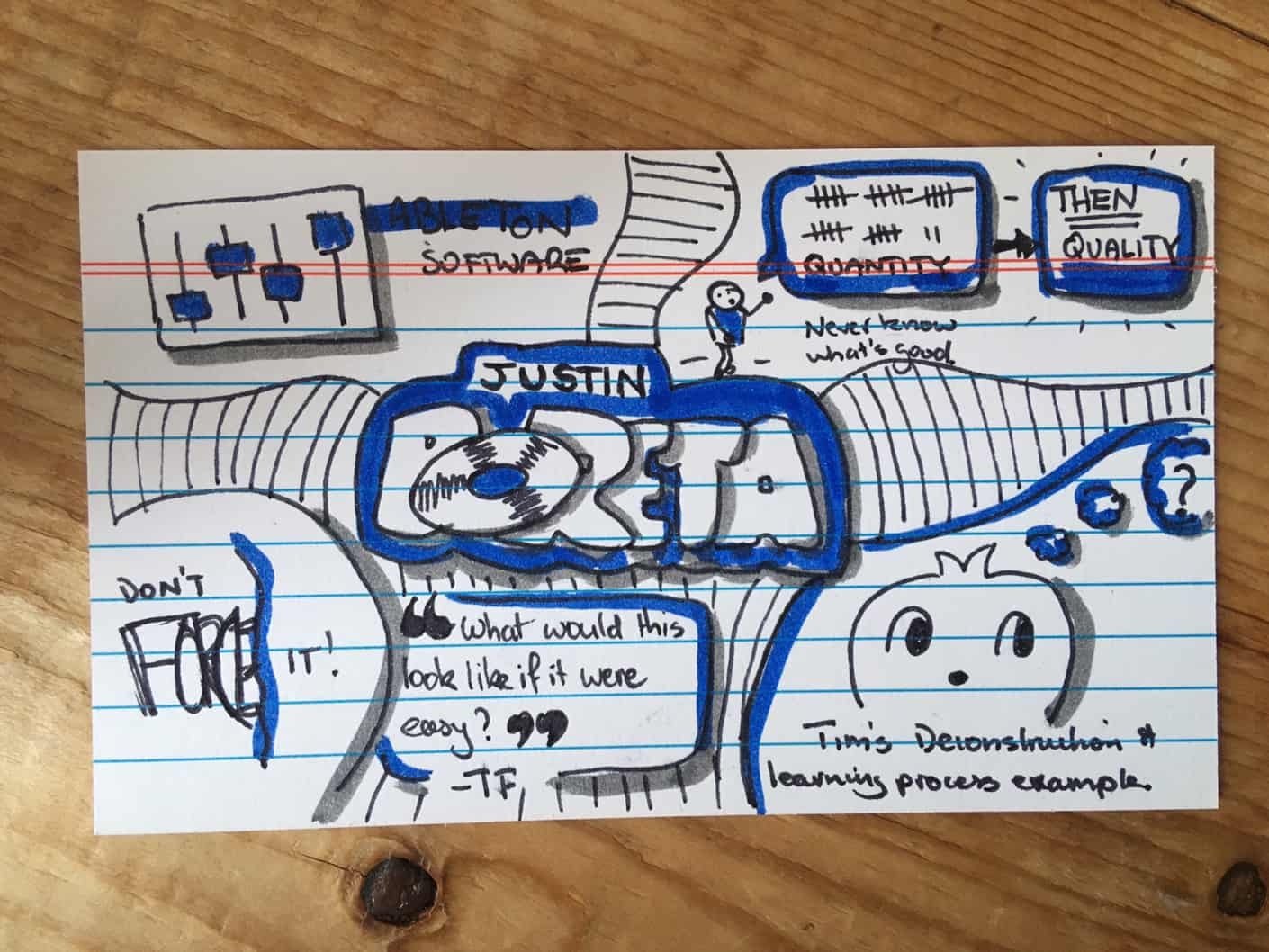 Justin Boreta is known as a founding member of the electronic group Glitch Mob.

He has no formal knowledge of traditional instruments so is an outlier when it comes to success. I like this as it’s a demonstration of an obscure way to get to the same destination.

He is a well-spoken and thoughtful speaker and I would encourage a listen of the podcast in its entirety.

The interview is an example of Tim’s learning process in action due to his curiosity around audio equipment and production.

The O of Boreta I’ve drawn as a disc and that sounds similar to DiSSS so that’s the cue to recall.

Tim asks questions like, “if you only had 1 month to teach me how to make a song, where would you start?”

It’s questions like these that help Tim identify the selection component of DiSSS. In other words, what 20% of content should I focus on?

A takeaway for Tim was the software Ableton, as it’s a fit for all sizes audio program.

Hopefully the link is clear to this cue. Boreta mentions some advice he’d give to his 20 years old self. First it’s to just chill out.

The second is to not force it. Identify when it’s just not going your way.

I smell a contradiction here because this is at odds with perseverance and grit. In essence, using tension to produce a gem.

But how does one discern between these two poles?

Tim suggests to ask “what could this look like if it were easy?”

This is a powerful question that would make Tony Robbins happy as it begins to equip you with resources to eliminate the pain of the process and focus on the essentials.

That’s my takeaway from this point. Forcing it is a signal that it’s not flowing. You can carry on but at an eventual cost that will be emotional or physical.

First become aware of this tension and then use it to creatively correct course.

Ask yourself, “how is this aligned to my mission/identity/trajectory?

If you say that it isn’t, you now have the confidence to eliminate it and redirect your focus.

Why Quality Over Quantity is Wrong

This concept is like a loud speaker that’s been talking into my face over the past week.

Boreta makes mention to their process when creating these epic tracks.

His secret? Create as many as you can because you can predict the winners. They’re are hidden away in there somewhere.

This pattern has popped up EVERYWHERE with top performers.

James Clear, in Atomic Habits, refers to a study of a teacher and photographers who were assessed differently.

One group was assessed in one photo. The other, in the number of photos.

Who produced the better photos?

The quantity group because they were tinkering and exploring the whole way through.

The quality group were caught up in perfectionism and didn’t produce anything remarkable.

The same theme appears in investing. How do you pick winners?

Only about 5% of investors can and that’s because they’re using something like an index fund. An even smaller percentage are picking winners consistently.

You spread your portfolio so it’s set up for asymmetrical risk/reward.

Comically, Tim referred time George Castanza’s insight to Jerry when he exclaims that he just needs to do the opposite of everything he has been doing on the way to success.

The most important concept here is risk management and punching a hole in the card. Showing up.

Damn you year 5 library teacher who instilled quality over quantity.

But that isn’t to say quality isn’t important. You just refine once you have the probability of success on your side.

The Little Baby Step Of Action

Lots of potential steps to take today. Listen to Glitch Mob, listen to Max Richter’s “From Sleep” to assist with evening routine (I have a friend who may find this useful), and lastly, check out the Ableton software.

I gotta make this easy, so listening to Glitch Mob it is!